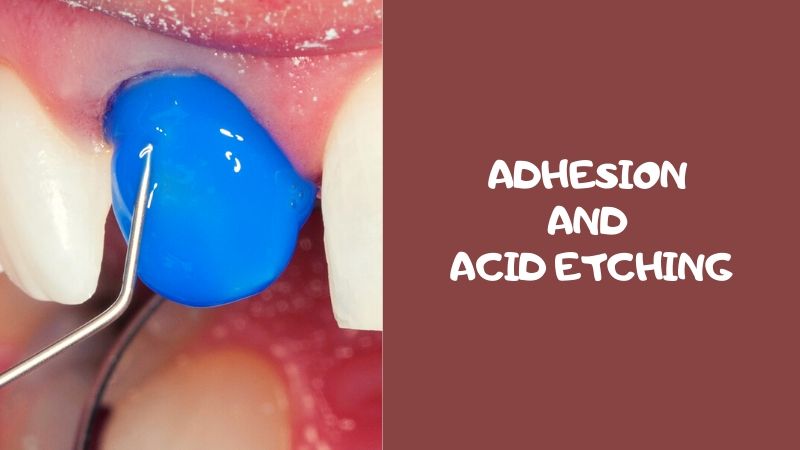 Adhesion is a phenomenon that occurs when dissimilar materials brought together in close contact are joined, and force must be applied for their separation. Adhesion is found in many cases of the use of restorative materials in dentistry. For example, when connecting filling material with tooth tissues, tooth sealant and varnish with tooth enamel, while fixing fixed dentures with cement. In orthodontics, braces are attached to the surface of the tooth on the principles of adhesion. Adhesion is also present in combined prostheses: in metal-ceramic prostheses – between porcelain and metal; in metal-plastic, between plastic and metal, etc. The material or layer that is applied to get an adhesive compound is called an adhesive. The material on which the adhesive is applied is called a substrate.

Mechanical adhesion consists in sticking the adhesive in the pores or surfaces of the substrate. It can occur at the microscopic level (the connection of the polymer with etched enamel) or at the macro level (applying plastic lining to the surface of the metal frame, fixing removable dentures with inorganic cement – zinc phosphate cement).

Chemical adhesion is more durable and reliable. It is based on the chemical interaction of two materials, which is inherent in aqueous cements on polyacrylic acid, in which there are functional groups capable of forming chemical compounds with hard tissues of the tooth – with calcium hydroxyapatite.

A diffuse compound is formed as a result of the penetration of the components of one material into the surface of another with the formation of a “hybrid” layer in which both materials are contained. In practice, adhesive compounds are difficult to find in their pure form. In most cases, when using a different chemical nature for tooth restoration, there is an adhesive interaction of a mechanical, diffuse and chemical nature.

When enamel is acid etched, a layer with a thickness of 10 microns is removed from the surface and micropores with a depth of 5-50 microns are formed. The effect of acid etching of enamel depends on several factors:

Most often, orthophosphoric acid is used for acid etching of a tissue tooth. The most optimal acid concentration is 30-40%. In some cases, the use of weak solutions of organic acids is recommended for etching dentin.

To prevent orthophosphoric acid from spreading to tooth sites where acid etching is undesirable, etchings are made in the form of colored gels.

The enamel acid etching time is usually 30 seconds. Experimental studies using SEM have shown that there are no differences in the degree of porosity of the enamel surface during an exposure of 30 seconds and 60 seconds. In addition, it was proved that the exposure time of the acid more than 60 seconds leads to the destruction of enamel prisms and poor adhesion.

The duration of removal of the pickling with a stream of running water should be equal to the duration of exposure to acid, i.e. 30 seconds.

To increase the adhesion force, the creation of an enamel bevel is recommended. It allows to increase the contact area of the composite with enamel. The strength of this compound increases when it is formed along the cross section of enamel prisms since in this case, the interprismatic substance dissolves during etching, forming wider and deeper pores.